Although thousands of Florida voters signed a petition demanding action, the Legislature will not pass any bills aimed at restoring and protecting the state’s 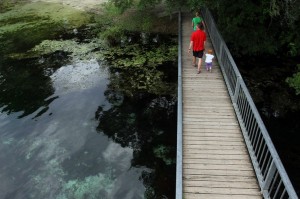 iconic springs this year, according to the chairman of the House Agriculture and Natural Resources Subcommittee.

The reason, according to Rep. Matt Caldwell, R-Lehigh Acres, is that state regulators are already setting what are called “minimum flows and levels” for the major springs, an effort he said should take another year and a half and help legislators figure out what further assistance might be needed.

“I thought it was best to let them move forward with that,” Caldwell said, explaining Department of Environmental Protection officials “came and told me … they’d like to be able to finish that.”

But setting minimum flows and levels, or MFLs for short, does little to help springs, according to Jim Stevenson, who headed the Florida Springs Task Force under former Gov. Jeb Bush.

One reason why: The MFL standard is based on avoiding what the law calls “significant harm,” as opposed to avoiding any harm at all.

“The MFLs will not protect spring flow,” Stevenson said. “If the Legislature really wanted to help the springs, they would take that word ‘significant’ out.”

Florida’s springs are suffering. Many are thick with toxic algae blooms fed by increasing nitrate pollution. Compounding the problem is a decline in their flow that in some cases resulted in them sputtering out completely. And geologists have found a disturbing increase in saltiness in a few freshwater springs, which could signal future problems with the state’s drinking supply.

The springs initiative begun under Bush led to the state’s purchase and preservation of thousands of acres that could have been developed or otherwise contributed to the pollution of the aquifer. But the Bush group’s recommendations for new laws were ignored by the Legislature — except for one involving septic tank inspections, which was passed and then repealed before it took effect.

Something similar happened with the MFL law. The Legislature decreed more than 30 years ago that state regulators should set minimum flows and levels for major waterways across Florida. The idea was to figure out how much more those rivers, springs and lakes can be drained for water supply purposes before causing “significant” environmental problems.

But the five water management districts and the DEP have been slow to carry out that law. So far, MFLs have been set for 22 of the state’s 1,000 springs, with another 26 scheduled to be finished this year, according to DEP press secretary Patrick Gillespie. Another 23 are slated for 2014.

Wakulla Springs, the largest in the state, has never had an MFL set by the Northwest Florida Water Management District. The district had been scheduled to set one in 2012 but failed, and earlier this year the agency requested permission to put off setting the limits for another 11 years.

When the Southwest Florida Water Management District, or Swiftmud, proposed levels for the Chassahowitzka and Homosassa rivers in 2011, it made residents along those rivers skeptical about the whole minimum-flow program. Ron Miller, vice president of the Homosassa River Alliance, labeled it “a statewide project to create a map of water sources available for development” that will “lead to the destruction of our already impacted springs, rivers and lakes.”

And Marty Kelly, who was in charge of the river flow project for Swiftmud, conceded that the law on setting minimum flows doesn’t provide for any guard against gradual damage from increased pumping: “You’re either significantly harmed or you’re not.”

Don’t expect the Legislature to take the word “significant” out, said Caldwell, a real estate appraiser.

Setting a minimum flow that prevented any harm would mean “you’d have to remove any development adjacent to the springs,” Caldwell said. “We have to take the straws out of the ground. That might require putting on a statewide development moratorium to protect the springs — but I think that’s politically infeasible.”

Still, Caldwell said, “If we don’t do something, we’re going to keep drawing it down until there’s nothing left of it altogether.”

Bills were filed in the House and Senate this year calling for the water districts to draw up plans for saving the springs and issue orders to make those plans happen. Neither bill ever got out of committee.

White Springs Mayor Helen Miller, who has spearheaded efforts by a coalition of North Florida government officials to get the state to better protect springs, said she was disappointed in the failure to act, especially since 15,000 people signed petitions calling for greater state protection for the springs.

“The will of the people should count for something,” Miller said. The failure to act shows that “on the state level we have a dearth of leadership on water issues.”

Craig Pittman can be reached at craig@tampabay.com